The mise en scene is the arrangement and surroundings of a scene in a film. The text, Film Art: An Introduction by David Bordwell and Kristin Thompson explores and identifies four areas that together create the mise en scene: setting, costumes including makeup, lighting and staging. I will define all four of these areas and provide my own examples of each present in film or video.

Andre Bazin states,“The drama on the screen can exist without actors” (Prokow 2010).

Above is a screen grab from the film Anna Karenina by Joe Wright (2012). For the most part, the film has been shot in a theatre. In the above image, the theatre stage can be seen in the background. Scenes filmed out of the theatre follow the stories of those free from the confines of the spectacle of society. Conceptually, Wright chose to film in a theatre to add a layer of understanding the social issues explored in the film. Every action of the characters is known and scrutinised by the community. Every setting is carefully considered in relation to the actors, speaking for itself of exuberance and at times mundaneness.

Costumes and makeup play an important role in films. They are most often in accordance with the location or period the film is set in. However, time and place does not always restrict makeup and costumes. 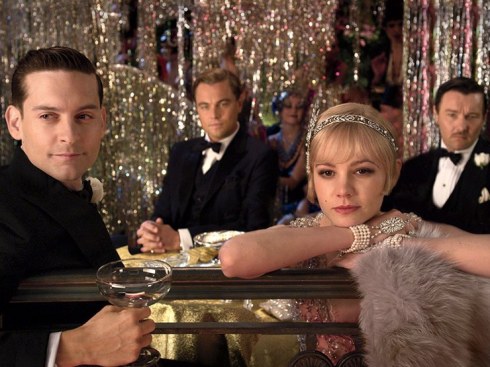 Above is a screen grab from Baz Luhrmann’s film, The Great Gatsby. Set in the 1920’s, the costumes and makeup were inspired by the period. Although authentically art deco, every piece of jewellery and costume is slightly more contemporary as to demonstrate a new take on an old classic story. In fact, much of the jewellery was sold at Tiffanys and had to have an appeal to people of the modern day.

Lighting involves the control over what is illuminated in a shot.

The above screen grab is from Blade Runner directed by Ridley Scott in 1982. Throughout the entire film, natural light is absent. To convey pollution and the ambiguity of truth, a murky fog always veils the artificial light. It is not until the end of the film that natural light is shown to represent hope and renewal.